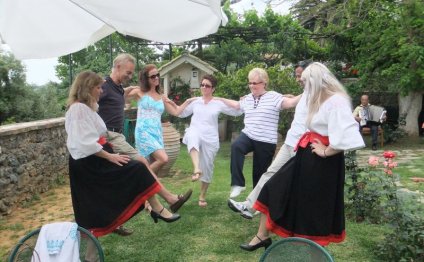 A popular four-piece band made up of Theodora Athanasiou, Apostolis Tsardakas, Evgenios Voulgaris and Dimitris Mistakidis, Apsilies eerily recreate the feeling of early twentieth-century Turkish art singing on ‘Dos Mou Piso Ta Louloudhia’. Dimitris Mistakidis is also celebrated for his crisp reinventions of the classic rebétika of the 1920s and 1930s as well as older café aman songs from Asia Minor. His 2006 debut solo album can be heard on the bonus CD and he can also be heard collaborating with Thanasis Papakonstantinou on ‘Pehlivanis’ and with Himerinoi Kolimvites on ‘Ston Eptalofo’.

Loved for their jazz-fusion slants on Greek folk tunes, Mode Plagal have collaborated on ‘Tatvla’ with the Istanbul-based group Vosporos. An instrumental track, it was named after the once mostly Greek neighbourhood (today’s Kurtuluş) in European Istanbul. Dilek Koç is renowned for interpreting Turkish classical, contemporary and folk music, and in particular songs from Asia Minor that are a common heritage of Greeks and Turks, such as ‘Kanarini Mou Glyko’. One of the most prominent musicians from a generation who have fused rebétika, café aman and laïká, Nikos Papazoglou here performs ‘Maisa Selini’, which talks of the bewitching effect of the moon.

The Rough Guide To Greek Café is a selection of some of the irresistible and enriching sounds that you can hear full tilt in concert, or more quietly on the sound systems of Greek restaurants, beach tavernas or café-bars.

Greek Travel Guide: Fun Snorkeling off a beach in Greece

How to Be Greek Without Being Greek: A guide to Greece ...