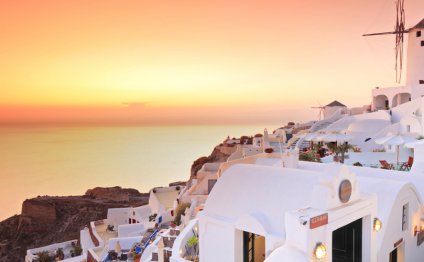 Step into the luxuries of history with your arrival in Athens, the capital of Greece and the cradle of Western Civilization. Olive trees climb along the golden hills that surround the capital. As you journey to Athens’s center you can see the pillars of the Acropolis rise above the city, the blue and white of the Greek flag flowing in the breeze. The streets begin to narrow and the passing cars start to dissipate. Remnants of ancient history stand tall around the city, from the pillars and arches to busts and writings, all prominently displaying their proud cultural identity and connection to modern Athens. Discover the gems of Athens at your leisure as you stroll through the historic city as if in a dream.

Pass the Panathenaic Stadium; the marble seats and around the stretch of field that runs along the main Athenian road which was used when Athens hosted the first modern Olympic Games in 1896. Taste the candied baklava: flaky puff pastry stuffed with rich almonds and drizzled with the natural sweetness of honey. The scent of roast lamb floats along the cobblestone streets of the Plaka, the pedestrian road of Old Athens. For a perfect introduction to the luxurious life of Greece enjoy dinner over the cobblestone streets with the vibrancy of Athenian life pulsating around you at Kalamaki. The grilled saganaki cheese gives a rich taste and buoyant texture and a truly luxurious body to bite into. The fairy lights float over the walkway, the city life passes you by, and you settle into the treat of contemporary flavors and the splendor of history wrapped up in present Athens.

Today you will journey deep into the past with a tour of the historic city of Athens, including the new Acropolis Museum. With a narrative that has shaped the entirety of Western Civilization spanning a period well over 2, 000 years, you will be surrounded by wonder, awe, and inspiration, knowing that the art and ruins of Athens predate even that of ancient Rome. Begin with your visit to Syntagma, also known as Constitution Square. Displayed within the metro station below are remnants of Athens, from the pipelines to old roads, from pre-Christian homes to a Byzantine burial ground. The glass display prominently shows the layers of the evolution of the city, beneath the plush modernity of Parliament, which was once King Otto the I’s palace. At the hour you can watch the changing of the guard. The soldiers that stand before parliament are dressed in standard cultural uniforms on Sundays: loose white shirts, large sashes, and shoes that resemble soccer cleats, complete with tacks positioned beneath the soles, once valued as a weapon during hand-to-hand combat.

Climb the old stairs of Acropolis Hill on your way to the base of the collected architectural masterpieces of the city, constructed during the Golden Age of Athens. There is a distinct scent of marble and earth; the sheen of the polished rock mirrors the sunlight. The sound of the crowd is replaced with the silent awe of the historic structures that have persevered through time and over occupation. Walk through the Propylaea, the monumental gateway that welcomes you into the collective temples that overlook the ancient streets and existing sprawl. Stroll through the walkway, beneath the towering pillars that stand proudly around you, the off-white color giving you another sense of the stained history that fills each crevice of the city. The pillars open up and you step onto the top of Acropolis Hill where several temples decorate the plateau including the eminent Parthenon dedicated to the goddess Athena, from whom the city of Athens was named. The open air of the plateau is almost taken away leaving you breathless as you sight the extravagant pillars of the Parthenon, the engraved triangular pediment displaying horses, people, and daily life dedicated to serving Athena. The affluence of Ancient Greece is written on the walls of the ancient hill, standing on the central mountain of the city that gave Athens a panorama of oncoming villages and peoples.

Day 3: The Grecian Urn in a Venetian Town

Today you will depart from Athens waving goodbye to the statues and pillars of ancient history. Fly from the mainland to Greece’s largest island, Crete where you will experience the blissful wonders of the food, people, sites, and towns of the western part of this unique island. Arrive in Rethymnon, a picturesque Venetian port city with the inviting stretch of the largest warm, sandy beach in Crete. The old port sits colorfully along the water’s edge. The buildings shine reds and blues meant to guide fisherman home from a long outing at sea. The lighthouse stands tall at the edge of a jetty, both to provide guidance to ships in the evening darkness and once used as a barrier to keep unwanted ships from entering the port. The water within the harbor is crystal clear giving you a view to the deepest rock formations below making it look as though the ground swirls in the gentle wake of the water.

Probably one of Greece’s most famous culinary triumphs these vine leaves stuffed with rice, pine nuts and herbs are usually…