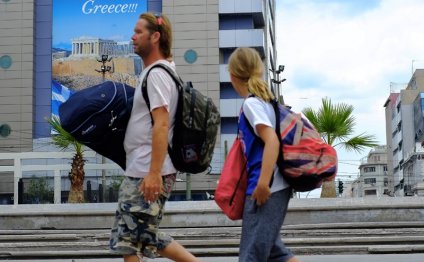 The Foreign Office has advised British tourists travelling to Greece to avoid relying on cards and that cash will be the best form of currency as the country enters a week of political and economic uncertainty.

Greece is close to a financial collapse with the stock exchange closed and banks shut all week after the European Central Bank (ECB) said that further credit to the nation was being refused after the eurozone rejected the latest bailout extension pleas from Greek politicians.

With new proposals put forward by creditors, the Greek people will go to the polls on Sunday to have their say on whether they agree with the latest round of austerity proposals. Having already overwhelmingly backed the anti-austerity, ultra left party Syriza in January, the future of Greece's place in the eurozone looks uncertain.

The ECB has said it will not extend emergency funding to Greece, thus forcing all banks to close this week with the government saying it needing to protect their liquidity. Currently, people can only withdraw up to €60 (£42) a day this week. The administration of Prime Minister Alexis Tsipras must pay €1.6bn to the IMF on Tuesday. That is also the day when the country's current bailout package expires, with the new austerity proposal offered by the eurozone yet to be agreed upon by Greece, after the government said it had to take the matter to the people in a referendum on 5 July.

What has the Foreign Office said?

The latest advice reads: "Visitors to Greece should be aware of the possibility that banking services – including credit card processing and servicing of ATMs – throughout Greece could potentially become limited at short notice. Make sure you have enough Euros in cash to cover emergencies, unforeseen circumstances and any unexpected delays."

What does this mean for holidaymakers?

The €60 restriction on withdrawals does not apply to people who hold bank cards from outside of Greece, but still, the main warning is that it may be difficult to find a reliable, working ATM.

Furthermore, this should not be a problem for large numbers of people going to Greece, as many have already paid for most of their costs. The Association of British Travel Agents (Abta) told tourists to take enough cash in case of emergencies, but a spokesman said, "50 per cent of the people on package holidays in Greece will be on all-inclusive deals where the vast majority of their expenses are paid up front."

What happens for holidaymakers who are in Greece after the result of the referendum? David Cameron has said that Greece will have to leave the euro if Greece votes no, but regardless of the outcome, tourists should not worry. The Independent's Simon Calder said even if Greece crashed out of the euro and reinstated the drachma, the effect on holidaymakers would be "marginal."

He said, "Hotels will no doubt continue to quote rates, and accept payment, in euros for the benefit of visitors from the single currency area - particularly Germany and Italy. It’s possible that prices may change by a few percent, but there should be no dramatic changes to fret about."

What has the Greek government said?

The Greek government informs those visiting or about to visit Greece, that the announced measures restricting the movement of capital do not affect in any way those who wish to make transactions or ATM withdrawals using debit or credit cards issued abroad.

"It should be noted that there is ample availability of both fuel and all products and services that ensure a smooth and fun stay for the visitors in every city, region and the islands."

The Minister for Tourism, Elena Kountoura has reiterated that "Greek tourism remains high in the preferences of our visitors."

"The tourists who are already here and those who are planning to come, will not be affected in any way by the events and will continue to enjoy their holiday in Greece with absolutely no problem."

Should I cancel my holiday?

Simon Calder would not advise cancelling a holiday - he's even planning to go there himself this summer.

Despite the political and economic turmoil, Calder says, "It is likely to be an excellent summer to holiday in Greece, because some of the expected visitors may mistakenly stay away - potentially lowering holiday prices and increasing availability for the rest of us. June is particularly smart (as are May and September) because the temperature will be perfect and the islands uncrowded.