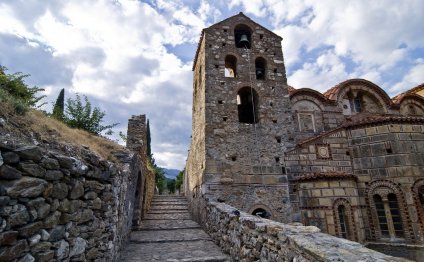 The island of Santorini (Thíra) is most impressive when approached from the sea as you sail into the massive caldera (sea-filled volcanic crater), almost totally enclosed by sheer cliffs ranging in height between 200 and 400 meters. Along the gray-black lava cliff tops, the whitewashed settlements of Firá and Oia are the island's most alluring (and most expensive) destinations. In fact, Santorini lives almost entirely from tourism, attracting visitors with its extraordinary landscape and its ancient archaeological sites. It is generally marketed as a romantic destination - popular with honeymooners, couples, and celebrities. Cruise ships sailing the East Mediterranean make a one-day port of call here.

The capital of Santorini, Firá (Thíra) is made up of whitewashed cubic houses and terraces, winding lanes, little squares, and blue-domed churches perched on the cliffs 300 meters above the caldera. Below town, from the small port of Skala, Firá can be reached either by walking or riding (mules are for hire) up the steep and winding stepped path (587 steps) or by taking the cable-car. Ferries dock at the port of Athiniós, connected to Firá by road (17 kilometers), while cruise ships put down anchor in the caldera, and passengers are transported to Skala by tender. Firá lives principally from tourism, and many of its buildings are now given over to small hotels, apartments, restaurants, cafés, souvenir shops, and jewelers.

On the northern tip of Santorini, 12 kilometers up the coast from Firá, Ía (Oia) is a picture-perfect village of whitewashed houses, several of which have been converted into chic little boutique hotels with infinity pools, overlooking the caldera. Like Firá, it lives from tourism, but caters for a more upmarket clientele. Steep paths zigzag up to town from Ammoúdi Bay, where you'll find a row of waterside seafood eateries. Oia is especially known for its stunning sunsets, which attract visitors from all over the island each evening through summer. It's possible to walk all the way from Oia to Fira following a footpath along the cliffs high above the caldera (allow three hours).

Formed by the massive volcanic explosion that blew the center out of the island some 3, 600 years ago, the caldera is the sea-filled volcanic crater that remained. Measuring 12 kilometers by seven kilometers, it is still home to volcanic activity - in its center rise the two Kaiméni islets with hot springs and gas emissions. Various agencies offer one-day excursions of the caldera by boat, including time to bathe in the hot springs and then have lunch on Thirassia, a tiny island on the west side of the caldera affording amazing views back to Santorini across the water.

Near the village of modern Akrotíri, 12 kilometers southwest of Firá, the ancient settlement of Akrotíri was buried below lava following the 16th-century BC volcanic explosion that created the caldera. Excavations have shown that Santorini was a flourishing and prosperous island before the eruption and probably lived from shipping and trading. Its connections with North Africa can be deduced from the outstanding frescoes (most of which are now in the National Archaeological Museum in Athens) that decorated its houses. Akrotiri reopened to the public in 2012, following several years of closure.

Nearby is the famous Red Beach below a spectacular red cliff wall. The beach is accessible along a path from the town of Akrotiri.

On the southeast coast, Ancient Thira dates from the ninth century BC. You can see the ruins of Hellenistic temples and other structures, as well as the foundations of Roman and early-Byzantine buildings. Finds from the site are displayed in the archaeology museum in Firá.

Lying close to the upper station of the cable-car in Firá, the small archaeological museum displays finds from Ancient Thira, ranging from the Dorian, Hellenistic, Roman, and Byzantine periods.

Slightly confusing, the Museum of Prehistoric Thira displays finds from Akrotiri archaeological site. For many people, the top tourist attraction is the Blue Monkeys wall fresco, but other ancient artworks on display include marble figurines, painted ceramics, tools, and weapons. You'll find it in a modern white building, close to the 1950s Mitrópolis church in Firá.

Santorini's capital before Firá took over in 1800, tiny Pyrgos is made up of whitewashed Cycladic cottages built around the ruins of a medieval hilltop castle. Previously a sleepy, all-but-forgotten town, Pyrgos has, since 2004, started to cater to up-market tourism with the opening of several small chic restaurants and boutique hotels. You'll find it in the center of the island, eight kilometers southeast of Firá.

From Pyrgos, a road runs to the summit of Mt. Profítis Ilías (584 meters), Santorini's highest point, affording stunning views over the island and out across the sea. Here stands the Profitis Ilias Monastery, which is open to the public. Inside, you can see the church, with a richly carved iconostasis, and the museum displaying the miter and crozier of Patriarch Gregory V, who was hanged in Constantinople by the Turks in 1821. Also of interest are the library, the monastic archives, and the kitchen. The monastery ran one of the many "secret schools, " which operated during the Turkish period.

Santorini's best known and most popular beach lies on the southeast coast, between the villages of Perissa and Perivolos. A six-kilometer-long stretch of fine, black volcanic sand, it is backed by tamarisk trees and overlooked by a string of seafood tavernas and cafés. There are sunbeds and umbrellas to rent, plus water sports facilities. It is approximately 12 kilometers from Firá.

what startup companies to invest in where to set up signature in outlook why product management interview question why london is better than new york why development plans are important where to produce music why entrepreneurs don't pay taxes why science communication is important how much project manager earn how often do entrepreneurs travel which entrepreneur is a craftsman where to find solutions for textbooks what technology wants which system produces blood cells how solution concentration how many entrepreneurs are in the world how often answer options which business should i start when london bridge is falling down whose an entrepreneur which project element was liam monitoring where management was first used how to meet startup founders where startup windows 7 where project youngin from where to buy solutions 4 products where management system where to manage kindle unlimited where is start up where is stonehenge from london how much system engineer make whose project is nlex how entrepreneur is helpful in creating jobs how project ipad to tv how london became the center of the world why device is not playing for nip who science council upsc how much london to paris train how development affects environment where is roadmap in jira how much design business card where technology and humanity cross where to manage icloud storage where manager work how much product to bring to a trade show
Source: www.planetware.com