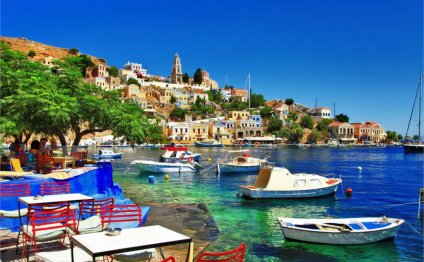 Once you cross the Corinth Canal into the southern part of mainland Greece, you’ve reached the Peloponnese Peninsula.

Here, you can visit any number of ancient sites. The area’s natural beauty is staggering with the Taygetos and Parnon mountain ranges dominating the peninsula. When the weather is warm, thousands of Athenians flock to the region’s beaches and seaside resorts. The region is also the most important wine-producing part of Greece.

Highlights of a visit to the peninsula are Patras, a city full of history, culture and entertainment options, and Olympia, which hosted the first Olympic Games.

The Peloponnese has a Mediterranean climate. Highs are usually between 75 F and 87 F from May through October, and 59 F to 68 F from November through April. June to September is the warmest period - usually between 82 F and 88 F - while the air is cooler and rain is typical from December through March.

Best Time to Fly to Greece

July and August are the busiest months on the Peloponnese when visitors come to soak up the sun and warm, dry weather.

December through March is the off season in the Peloponnese, as the weather is cooler and rainier during this time.

To get around, visitors can rent a car, take a bus or travel by train (in some areas). You can also take taxis or rent a bike or moped to get around the cities. Ferries run from Peloponnese to some of the Greek islands. The closest airport is Kalamata International Airport.