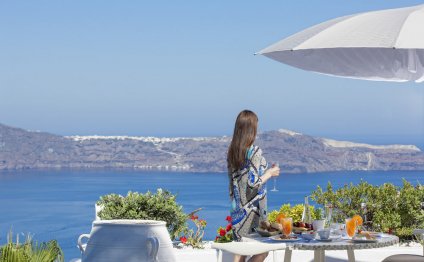 This Aegean island has been charming visitors for centuries with its pretty villages, romantic sunsets and tranquil pace of life.

Santorini rises dramatically from the sea on a crescent-shaped basin, or caldera, formed by an ancient volcanic eruption. Its whitewashed villages tumble haphazardly down the cliffs, dotted with churches and windmills while, at its shoreline, colourful fishing boats bob and toss on the sparkling waves.

The island was named by the Venetians who landed here in the 13th century and dedicated it to Saint Irene. A devastating earthquake in 1956 destroyed many of the ancient buildings, but it has been thoughtfully rebuilt in the traditional style and has lost none of its historic charm.

The capital, Firá, is a popular stopping-off point for island-hopping cruise ships, with plenty of shops, restaurants and bars to keep the holiday crowd happy. Picturesque Oia on the island’s northernmost tip is known for its romantic sunsets and typical blue and white houses, while the timeless village of Pyrgos has plenty of friendly tavernas as well as a 15th-century castle. The eye-catching black sand beaches of Perivolos and Perissa are popular spots for sunbathing, while the rocky coastal strips around Mesa Pigadia and Pori are fun to explore on foot.

Santorini enjoys a pleasant climate all year round, with temperatures averaging 29° C in the summer and around 15° C in winter. The narrow village streets and steeply banked harbours can get very busy during the peak tourist season though, so if you want to avoid the crowds choose a quieter time of year.

There is an airport on the east side of the island served by both scheduled and charter flights and most of the main sites are accessible by road. An economical way to see this compact island is by hiring a taxi or renting a car to get from A to B.

All Inclusive holidays offer incredible value for money as just about everything is paid upfront. Your flights, accommodation…