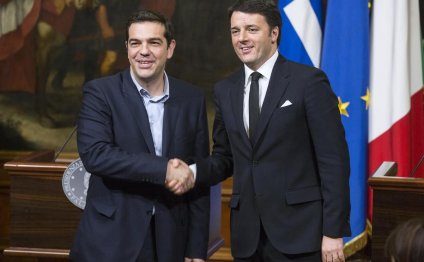 As Greece moves ever closer toward capital controls and default, one hopes that European policymakers are mindful of the long-run potential fallout of such an event on Europe's overall economy. A Greek move in the direction of exiting from the euro could have an important bearing on the much larger and still very troubled Italian economy. While the euro can very well survive without Greece, it is difficult to imagine how the euro could survive if Italy were to eventually follow Greece out of the euro.

The Italian economy, which is the eurozone's third largest economy, dwarfs that of Greece in relative importance. Whereas Greece accounts for less than 2 percent of the eurozone economy, the Italian economy accounts for as much as one-sixth. Similarly, whereas Greece's public debt is less than 350 billion euros, Italy's exceeds 2 trillion euros, which makes Italy the world's third-largest sovereign bond market.

A principal reason why European policymakers should be concerned about contagion from an eventual Greek euro exit to the Italian economy is that Italy's public debt dynamics are on an unsustainable path. At the start of the European sovereign debt crisis in 2010, Italy's public debt to gross domestic product (GDP) ratio was already very high at around 115 percent. Since then, the country's debt ratio has risen to its present level of 135 percent and it shows no sign of coming down anytime soon. While this very high debt level has proved to be relatively easy to manage in today's world of abundant global liquidity, one has to wonder whether the same will be true when global liquidity conditions normalize.

What makes Italy's high debt level all the more troubling is Italy's very poor economic growth record. Some six years after the 2008-2009 global economic crisis, Italy's economy is still some 7 percent below its pre-crisis peak. Even more disturbing is the fact that the Italian economy today is practically at the same level as it was in 1999. This has to raise the most serious of questions as to whether the Italian economy is capable of growing itself out from under its debt mountain.

If Italy is unable to generate rapid economic growth, the only way that it can reduce its debt pile is by exercising considerable budget discipline over the longer haul. However, maintaining an austere fiscal policy stance in a euro straitjacket, which precludes exchange rate depreciation as an offset to budget tightening, can prove to be counterproductive in that it makes economic growth all the more difficult to achieve.

It is also far from clear whether Italy has the political will to endure many years of budget discipline. Indeed, a striking feature of today’s Italian political landscape is the growing evidence of budget austerity fatigue and the rising tide of euro skepticism. This is underlined by the fact that today, all of the major Italian political parties — other than the ruling Democratic Party — openly question the advantages of Italy's continued euro membership.

[APヘタリアMMD] When Romano, Italy and Greece are drunk...