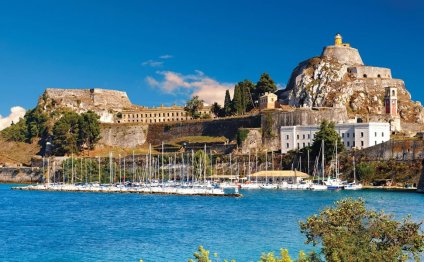 Many travelers use European companies to arrange trips in Italy and Greece; others prefer American firms to avoid issues such as language barriers and international phone calls. American-led tours cover much the same territory as their European counterparts, including the antiquities of Italy and Greece, the dramatic natural landscape of the two countries, and the charming, historic towns and cities dotting the countryside.

Smithsonian Journeys offers a range of Greek and Italian tours to meet many interests. In Italy, you can take a cycling trip in Tuscany, which includes a visit with a monk in an abbey, an architectural tour of Siena with the owner of a bookstore and a cooking lesson featuring local cuisine. Another Italian trip explores Sicily focusing on art, architecture, food and wine. For tours of Greece, you can choose a trip that spotlights classical musical performances, follow the path of the Trojan hero Aeneas, or explore the ancient civilizations in Greece and Turkey. Smithsonian tours prides itself on visiting spots designated as World Heritage Sites by the United Nations. In Italy, these include the Amalfi Coast and the historic centers of Rome and Florence; in Greece, the Acropolis and the medieval City of Rhodes. Smithsonian Journeys P.O. Box 23182 Washington, DC 20077 877-338-8687 smithsonianjourneys.org

With Cross-Culture Journeys, you can travel in Sicily or take a tour of three major Italian cities. On the island of Sicily, you pass through volcanic landscape and visit the city of Palermo, with its multitude of influences from Moorish to Roman and Byzantine. The three-city tour takes you to Rome, Florence and Venice where you soak in art of the Renaissance and other eras. Cross-Culture Journeys also offers trips in Greece, including one that explores ancient treasures from Athens to Delphi and Thessalonika, and another that cruises among islands in Greece, Malta and Italy. There's also a trip designed for the whole family: It goes to the Greek islands and Turkey and includes presentations for grownups plus lively learning activities for children. Cross-Culture Journeys 12 White Pine Rd. Amherst, MA 01002 800-491-1148 ccjourneys.com

Elderhostel, a leading provider of lifelong learning, now calls its tour program Exploritas. The name is new, but the intended audience is still the same: travelers age 50 and up. Exploritas offers more than four dozen trips in Italy, including a walking tour of lakes such as Como and Maggiore, and an outing that combines culinary instruction, wine tasting, music and art in Siena, Trieste and Parma. You can also find a variety of Greek tours such as a trip to Athens, the Peloponnese and Crete, and a cruise to islands in Greece, Bulgaria and Turkey. To meet participants' needs, Exploritas includes a description of the terrain on its tours (for instance, "walking up to a mile on flat city sidewalks"). Exploritas 11 Avenue de Lafayette Boston, MA 02111 800-454-5768 exploritas.org

Student Tours of Greece and Italy: Island Service and ...