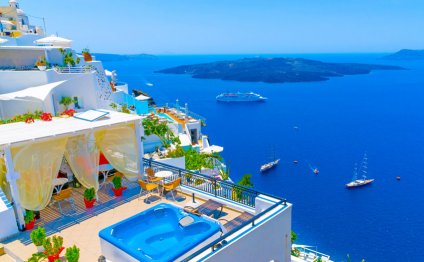 The Sacred Way is the main route through the Sanctuary of Apollo, leading from the gateway uphill 200 meters to the Temple of Apollo. Originally, it was lined with votive monuments and treasuries erected by various Greek cities, reflecting the diversity of the political pattern of ancient Greece. The monuments themselves have disappeared but many of their bases have survived.

All that remains of the Temple of Apollo, the most important building in the Sanctuary of Apollo, are the foundations. It was built on the same location three times and featured columns, sculptures, and statues inside. The present Temple of Apollo, built in Doric style in the fourth century BC, preserved the ground-plan of the earlier sixth-century-BC Archaic temple and re-used the old column drums, but the detailing is typical of the late-Classical period. It is here, in the adyton (inner shrine) that the Pythia (priestess) would sit and utter the words of the Oracle, sent to her by Apollo and interpreted by the priests.

Behind the Sanctuary of Apollo is the sixth-century-BC Polygonal Wall, supporting the platform on which the Temple of Apollo stands. The stones that make up the wall are cut into unusual polygonal shapes (hence the name) and carved with ancient inscriptions. The wall's main face is 90 meters long and it was originally two meters taller than it is today.

Treasury of the Athenians

Treasury of the Athenians

The Treasury of the Athenians (built around 510 BC and re-erected 1903-06) is in the form of a Doric temple. It was built by the Athenians, using marble from the island of Paros, to house their offerings to Apollo. It is decorated with a fine frieze - what you see is a copy, the original is in the Delphi Museum.

A flight of steps leads up to the theater. Dating from the fourth century BC, with later alterations during the Roman period, the theater could accommodate 5, 000 spectators on 35 rows of stone benches. It was built to host musical contests at the Pythian Games, which were held at Delphi from 590 BC onwards. Lying within the sacred precinct, it commands fine views of the entire site.

The Stadion, which lies at the highest part of the site, 50 meters above the Theater, was built in the fifth century BC but gained its present appearance under the Romans in the second century AD. Its tiered stone seating could accommodate 500 spectators. Like the Theater, it was built to host the Pythian Games, staged at Delphi from 590 BC onwards - athletic contests would have been held here.

In a rocky gorge to the east of the sacred precinct, you'll find the Castalian spring and the remains of two monumental fountains, with recesses in the rocks for votive offerings. Here, the Pythia (priestess) washed, as did those wishing to consult the oracle, purifying themselves before making their way to the Temple of Apollo.

Close to the fourth-century-BC Temple of Athena, stands the Tholos, based on a circular plan with the remains of 20 Doric columns on the outside and 10 Corinthian columns in the interior. It was built around 380 BC, and though its exact function is unknown, it is regarded as a masterpiece of Classical architecture.

Lying between the ancient site and the modern town of Delphi, the archaeological museum displays a fascinating collection of finds from the site, including friezes, statues, votive offerings, and stele. Exhibits are displayed in chronological order and arranged in 14 rooms. There is also a café and a gift shop.

Exploring the Modern Town of Delphi

The present little town of Delphi (population 2, 300) is now a concentration of hotels, guest houses, restaurants, shops, and attractions catering to tourists. It was established in 1892, when the village of Kastrí, which had grown up on the site of the was moved to a new position one kilometer west to allow excavation of the ancient site. This is a good base for exploring the surrounding area.

Skiing and other Outdoor Pursuits at Mount Parnassus

Skiing and other Outdoor Pursuits at Mount Parnassus

The Delphi area offers plenty of scope for mountain walks and winter sports, mainly on Mount Parnassus (Parnassos), which rises 2, 457 meters, making it one of the highest mountains in Greece. Snow-covered in winter, Parnassus is home to the country's largest ski center, with 27 kilometers of ski runs.

The Mountain Village of Arahova

The Mountain Village of Arahova