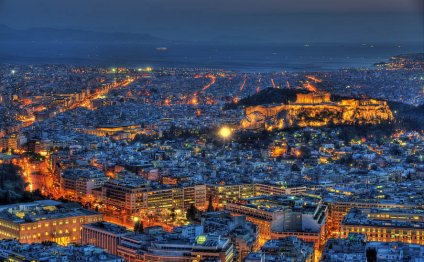 Temple of Olympian Zeus
The Temple of Olympian Zeus is a colossal ruined temple in the centre of the Greek capital Athens that was dedicated to Zeus, king of the Olympian gods. Construction began in the 6th century BC during the rule of the Athenian tyrants, who envisaged building the greatest temple in the ancient world, but it was not completed until the reign of the Roman Emperor Hadrian in the 2nd century AD some 638 years after the project had begun.

Filopappos Hill
The Philopappos Monument is an ancient Greek mausoleum and monument dedicated to Gaius Julius Antiochus Epiphanes Philopappos or Philopappus, a prince from the Kingdom of Commagene. It is located on Mouseion Hill in Athens, Greece, southwest of the Acropolis.

Byzantine Museum
The Byzantine and Christian Museum is situated at Vassilissis Sofias Avenue in Athens. It was founded in 1914 and houses more than 25, 000 exhibits with rare collections of pictures, scriptures, frescoes, pottery, fabrics, manuscripts and copies of artifacts from the 3rd century AD to the late medieval era. It is one of the most important museums in the world in Byzantine Art.

Kerameikos
Keramikos is an area of Athens, located to the northwest of the Acropolis, which includes an extensive area both within and outside the ancient city walls, on both sides of the Dipylon Gate and by the banks of the Eridanos River. It was the potters' quarter of the city, from which the English word "ceramic" is derived, and was also the site of an important cemetery and numerous funerary sculptures erected along the road out of the city towards Eleusis.

Benaki Museum
The Benaki Museum, established and endowed in 1930 by Antonis Benakis in memory of his father Emmanuel Benakis, is housed in the Benakis family mansion in downtown Athens. The museum houses Greek works of art from the prehistorical to the modern times, an extensive collection of Asian art, hosts periodic exhibitions and maintains a state-of-the-art restoration and conservation workshop.

Roman Forum and Tower of the Winds
The Tower of the Winds is an octagonal Pentelic marble clocktower in the Roman Agora in Athens that functioned as a horologion or "timepiece". The structure features a combination of sundials, a water clock, and a wind vane. It was supposedly built by Andronicus of Cyrrhus around 50 BC, but according to other sources, might have been constructed in the 2nd century BC before the rest of the forum.

Museum of Cycladic Art
The museum was founded in 1986 in order to house the collection of Cycladic and Ancient Greek art belonging to Nicholas and Dolly Goulandris. Starting in the early 1960s, the couple collected Greek antiquities, with special interest in the prehistoric art from the Cyclades islands of the Aegean Sea.

The Agora
The Agora was a central spot in ancient Greek city-states. The literal meaning of the word is "gathering place" or "assembly". The agora was the center of athletic, artistic, spiritual and political life of the city. The Ancient Agora of Athens was the best-known example.

Acropolis
The Athenian Acropolis is the ancient high city of Athens, a prominent plateaued rock perched high above the modern city with commanding views and an amazing array of ancient architecture, mostly from the Classical period of Ancient Greece, the most famous of which is the Parthenon. A visit to Athens is not complete without visiting the Acropolis - hundreds of tourists each day accordingly make the pilgrimage.