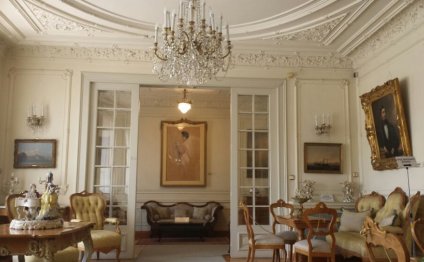 Museum of the city of Athens

One of the aristocratic living rooms, fully laid out with a dinner service of fine porcelain.

Engravings and narratives tell the tales of the buildings:

Some, like the Mint, disappeared through the ages; others were more recent constructions, while several survived the ravages of war and abandonment like the building of the museum – home for seven years to King Otto and Queen Amalia before they moved to the palace (present-day Parliament).

Though they vacated the premises 168 years ago, the first floor resonates with the presence of the royal couple through a display of their possessions: his binoculars and throne, her writing desk.

The well-appointed adjoining rooms also contain objects such as an ornate table with a built-in backgammon board, while the internal bridge takes you into the living rooms of prominent Athenian aristocrats, where tables are still laid with exquisite porcelain as though guests are expected to tea.

The lofty proportions of the rooms are best illustrated by the huge gilded mirror at the top of the stairs and the richness of the parties once held here is depicted in “Carnival, ” a painting by Nikolaos Gyzis, considered among Greece’s most important artists in the 19th century.

You mustn’t finish your visit without stopping for a coffee and snack – if the day is fine – at the bistro in the garden that once connected Klafthmonos Square to the Old Parliament.

The Best of Athens

Athens is a big city that s a collection of many different neighborhoods, each with its own distinctive flair. Here are some…

This is a picturesque area in the centre of the city very close to Monastiraki Square. It has a strong local colour, not…