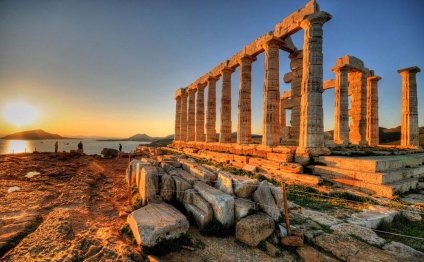 Plopping down onto the bed in my Athens hotel room, I burst into tears and announced that I wanted to turn right around and head back home.

“I hate Athens!” I pouted like a tantruming child. “I’m phoning my mom and telling her I’m coming home!”

Was Athens was really that bad? So bad that a girl who loves travel more than anything, who spends her days dreaming of all the ancient sites she wants to visit, would hate a place after being there for less than an hour?

When I arrived in Athens, I’ll admit, I was emotional. A terrible journey consisting of a four hour delayed flight from Edmonton, being left on the tarmac in Montreal in a over-crowded, sweltering bus, then finally flying 9 1/2 hours without a wink of sleep, left me exhausted, hungry and unhappy.

Athens didn’t have a chance.

All I saw was an Athens that was dirty, vandalized and polluted. Old dilapidated buildings- they didn’t charm me or leave me wondering what their history was. Graffiti tags lining the streets- I didn’t see the art, instead I questioned my safety.

I was disappointed. Where were the grand temples? The historical buildings? The delightful sidewalk cafes?

Athens was failing me.

I made a quick judgment of a city I hadn’t even really set foot in yet. All I had seen of Athens thus far was from the window of a bus shuttling us from the airport.

Back in the hotel room, I calmed down, got some food and realized I was rash in my decision to dislike Athens. Tomorrow would be better, I hoped.

And it was…for the most part.

“Why? Why am I not enthralled like I normally am?” I wondered.

Finally it hit me. I kept comparing Athens to Rome (which I had visited a year prior).

Rome had amazed me, captivated me for the entire week I was there. Coming to Athens, I thought the two cities would be very similar. After all, the Roman Empire was heavily influenced by classical Greek culture. The Romans also adopted a lot of Greek architectural theories.

The two cities were similar in this sense- the architecture and the history behind the ancient sites were equally enjoyable. But there was just so much more in Rome- I needed a week to do the city justice. All of the ancient sites in Athens I saw in one day. I also found the ruins in Rome to be better preserved, more intact, than those in Athens.

All of this should have been expected though- Rome was a sprawling Empire, Athens was a city-state. Plus, Athens’ glory days occurred much earlier in history that Rome’s did, so of course it’s less likely that it’s buildings would be unscathed by the passing of time.

Instead of appreciating Athens for what it is, I walked around feeling let down by what I expected it to be, what I wanted it to be.

Midway through my first day in Athens, I realized that if I didn’t let go of my expectations, I would have a miserable time. So I decided to give Athens a fair chance. Once I did that, I came to enjoy the city. Athens has one of the most significant ancient monuments in the Western world- the incredible Acropolis. Athens is also home to one of the world’s greatest museums- The National Archaeological Museum, which houses the most important finds from Greece’s archaeological sites. And it does have those atmospheric restaurants with the outdoor seating I love so much.