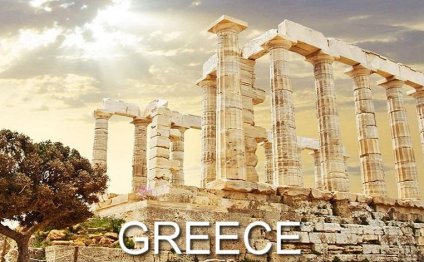 I was in Athens, on a rooftop restaurant under a floodlit Acropolis, marveling at how a Greek salad never gets boring. It was the last day of a long trip. I was reviewing, as I always do after completing an itinerary, how effectively our time was spent. We had kept our focus more on seeing historic sights on the mainland rather than luxuriating on Aegean Islands. Given that focus, here are the top ten stops — in itinerary order — that make what I consider the best two weeks Greece has to offer:

Athens, a big ugly city, has obligatory ancient sights (the hilltop temple of the Acropolis, and the ruined forum of the Agora); an extremely touristy old quarter (the Plaka); and fine museums — the best in the country. Its four million people sprawl where no tourist ventures, including new immigrant zones with poor yet thriving communities. The joy of Greece is outside of Athens. See it and scram.

Delphi is a touristy little mountain resort with a breathtaking, mountainous setting. It's a long way to drive (three hours from Athens) for some ancient ruins. But learning about the oracle (whom the ancients consulted for advice) and being there in the empty cool of the early evening, you know why, in ancient times, this was considered the center of the world.

With Olympia's once majestic temple columns toppled like a tower of checkers by an earthquake, the site is as evocative (with the help of its excellent museum) as anything from ancient times. And you just have to play "On your mark, get set...go!" on that original starting block from the first Olympic Games in 776 B.C.

Kardamyli, a humble beach town, has a "Bali in a dust storm" charm. This handy base for exploring the desolate Mani Peninsula works like a stun gun on your momentum. We could have stayed there for days, just eating well and hanging out. It's the kind of place where travelers plan their day around the sunset.

The Mani Peninsula is stark. If Greece had a Tombstone and an OK Corral, it would be here. The awe-inspiring fortified ghost hill town of Vathia is vendetta ville — it seems everyone lived in forts and sat in corners looking out. While the peninsula in general is bleak, we enjoyed walking through one of the towns and popping into sumptuous old fresco-covered churches.

Monemvasia, a Gibraltar-like rock with a Crusader-style stone town at its base, has ruins all across its Masada-like summit. It's connected by a causeway to the mainland. Summiting Monemvasia is a key experience on any Peloponnesian visit. Rather than sleep here, we chose Gythio: This workaday fishing town, with little tourism and a hearty charm, has a harborfront perfect for a sunset stroll and plenty of cheap restaurants and good affordable hotels.

Although it's famous and "on the way, " skip Mystras. Yes, it was once the cultural capital of the Byzantine Empire, but today there's just not much to see. Mystras spills down a mountain over the town and the scant ancient ruins of Sparta. Sparta — where mothers famously told their sons to "come home with your shield or on it" — is a classic example of how little a militaristic society leaves as a legacy for the future.

Charming Nafplio, though it has plenty of tourism, is both elegant and proud. It's a must-see on any Greek visit because of its historical importance (the first capital of an independent Greece), its accessibility from Athens (an easy two-hour bus ride), and its handy location as a home base for touring both Mycenae and Epidavros. The town has a beach, great restaurants, a thriving evening scene, and a good balance of local life and tourist convenience.

Mycenae is the ruined capital of a civilization that was as mysterious to Socrates and Plato as those guys are to us...a thousand years older than the Acropolis and other Golden Age Greek sights. Its fine museum tells the story.

Nearby Epidavros has a lousy museum and forgettable ruins except for its magnificent theater — the best of the ancient world and still used for plays today. For that reason alone, Epidavros is an essential stop.

The island of Hydra, just a quick hop from the mainland, gave our trip a fine island paradise finale. Hydra, so close to Athens (with direct 2-hour hydrofoil connections about hourly), is amazingly laidback and real, with just enough tourism to make it fun and lively.

Many tourists spend their entire time on Greece just island-hopping, setting foot on the mainland only to fly in and out of Athens, but there's much more to see, learn, and experience in this ancient land.

Advantages of Medical Tourism in Greece as Top Destination ...

Travel in Greece | A World of Destinations

Greece has a great variety of places where one can relax and get away from it all for an ideal vacation. Given that millions…