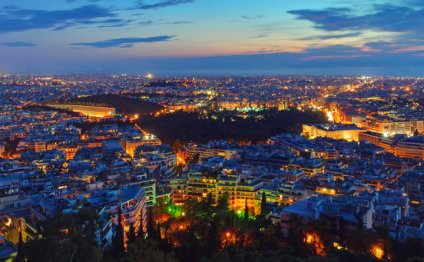 Most people have a love-hate relationship to Greece's capital. On one hand it is a city with a wide variety of things to see and do. From here you can also get to most places in Greece: by air, train, boat or bus.
On the other hand it is a huge, busy place with about half of Greece's
population living there (close to 5 million). There are places you do not want to be alone at night, and Athens has a big problem with traffic jams and pollution, especially the smog.
It is a fascinating place, though. It is one of the oldest cities in the world, and walking through its ancient Agora or on the Acropolis,
it does make you feel you are walking on, if not sacred, very important ground.
The Athenians are now living better after the Olympic games many things have been improoved. This means that a lot of buildings have been renovated, and big projects have been carried out. The infrastructure of the city has been modernized with new highways (Attiki odos) that circulating Athens from Aspropyrgos to the new Airport at Spata and goes until the western suburbs of Athens.
Many historic areas of Athens have been made for pedestrians only like the whole Area around Acropolis from Dionysiou Areopagitoy street until Thission and Keramikos.Plaka is also 90% pedestrianised as well as the Ermou street the main shopping street of Athens.
The port of Piraeus has been modernized as well with parking areas around the port and new docks for the Greek ferries and Cruise ships.

Athens is often mentioned in Greek mythology. The ancient Athenians believed that they originally came from Attica and were not an immigrated people. To support this, they would refer to their first king, Cecrops, who was a man-snake born out of the earth. He had been the ultimate judge, when the goddess Athena and the sea god Poseidon competed in becoming the patron of the city, a competition Athena was to win, naming the city.

The greatest hero of Athens was Theseus, whose wicked stepmother was the infamous Medea, hated by the Athenians and forced to flee. The hero had managed to stop the yearly tribute of youngsters to king Minos of Crete by killing the Minotaur, and his bones were kept in a special monument here. Oedipus died in Athens, and Orestes was brought before the Aeropagus here after revenging his murdered father Agamemnon.
Many historical personalities were also born here, and even more lived and worked here. Socrates wandered the streets, discussing philosophical questions with those he met. Demosthenes preached against the Macedon-ians, and Plato and Aristotle taught here. Pericles made his time a golden one, and Alcibiades was admired and hated. Later on, St. Paul was to preach a new religion called Christianity. The list could go on forever...
There are evidence of ancient settlements in Athens from the 7th millennia BC. Athens was not always the most important city of Greece, and its greatest rival in antiquity was Sparta and the Persians.
The great orator Demosthenes warned the people of Athens about the Macedonians, and he was right: in 322BC Athens was conquered by them.
The Turks invaded Athens in 1456, and the city stayed under Turkish rule for about 350 years. In 1834 Athens was declared capital of Greece - then, only about 6000 people lived there.
In 1941 the Germans occupied Athens and during the two months the Greeks resisted and over 300 000 people died of starvation. The old film footage of Hitler walking on the Acropolis is a bitter memory of this time.
Athens was also a battlefield during the civil war 1946-1949. The junta took over in 1967 and Greece was a dictatorship until 1974. In 1981 Greece joined the EU.

The first place you should visit when in Athens is of course the Acropolis. Standing up there, on the sacred rock as the Greeks call it, you can practically feel the magnificence of ancient Greece. Don't think you'll be alone there though.
Other archaeological sites are the agora, the market, with the temple to Hephaistos still in quite good shape, as well as the temple to Zeus and the arch of Hadrian.
Museums of interest are, amongst others, the Acropolis museum, the National Archeological museum, the Folklore museum, the Ceramics museum (Keramikos), the Byzantine museum, the Music museum, the War museum, the Benaki museum etc. All in all, there are about 50 museums in Athens. A popular place for shopping or food and drink is Plaka, just below the Acropolis. It is considered quite a touristy area, but the fact is that you here can get an idea of old Athens, with low buildings and little streets.
In Monastiraki there is a bazaar which is quite incredible, in Hephaestou street and around the small square of
At the Syntagma Square you can visit the Tomb of the Unknown soldier. Here you can see the guards in their impressing uniforms, the Evzones, and if you are lucky you will see the slow and complicated change of guards. You can also feed pigeons here. Interestingly, there used to be a tomb to the unknown hero in ancient Athens
The opera, Megaron Mousikis, holds many wonderful performances, but even lovelier is the Herodes Atticus theatre just below the Acropolis.

Athens Greece has such a wide variety of things to do that it almost is no idea to write it all down. For example, you have all the sights and the museums, concerthalls and theatres. Then, there are many cinemas, a great nightlife, bazaars, fashion shops and super modern shopping malls. Go up to the Lycavitos hill and get a wonderful view. You can go to Athens Riviera from Paleon Faliron up to Kalamaki, Alimos, Glyfada, Vouliagmeni and Varkiza for some sun and sea. You can visit as well the National gardens that are located next to the Parliament at Syntagma square.

There are several beaches at Athens Riviera The most popular ones are in Glyfada, Vouliagmeni, Varkiza, Nea Makri, Crysi Akti (Golden Coast ), Lagonisi, Kavouri and Alimos. Most of the beaches in Athens are organize and you have to pay a small entrance fee to these beaches - this is to keep them clean since it has millions of visitors every summer.

The ancient Greeks (mainly the ) were a unique people. They believed that individuals should be free as long as they acted…

There are two basic tariffs, number 1 and number 2. Depending on the time of day and the journey, the driver must select…