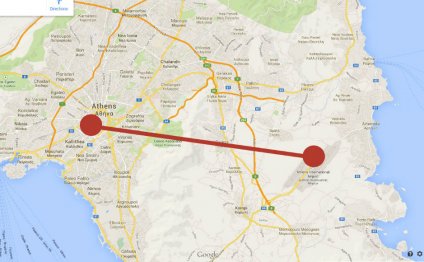 Before you leave the airport area, take a little walk (unless you have a mountain of luggage) and enjoy the beauty of the new airport. You have been in a plane for some hours and your muscles will be grateful to you for the exercise.

There are different ways to get from Eleftherios Venizelos International Athens Airport in Spata to the center of Athens:

- you can go on foot. This is the best way to see the most but the worst for your luggage and your
feet. The latter will have enough work to do during your stay in Athens.
- before your departure you can book a taxi online. This is the most hassle free way as the driver will
be waiting for you upon your arrival and you won’t have to wait for one on busy days.
- of course you can also take a normal taxi from the taxi queue.
- you can take the metro (suburban rail) to Syntagma Square or Monastiraki Square.
- you can take the express bus that will take you to Syntagma Square .

A good way to avoid being scammed, crowded express buses or trains is to book your taxi transfer online (up to four people per taxi) before your arrival. The taxi driver will be waiting for you in the arrival hall of the airport holding a sign with your name. He will take you straight to your hotel or any other destination you booked online. As you paid when you booked your taxi, there is no risk of being overcharged and no money hassle. You also won’t be asked to pay more than you did. Read more…

The Athens International Airport is located 33 km (20, 5 miles) southeast of Athens and the center is easily accessible via Attiki avenue, a six-lane motorway constituting the Athens city ring road. The distance to the port of Piraeus is 45 km (27, 9 miles).

Public transport to Athens and the port of Piraeus is provided by express airport bus connections 24 hours per day.

A ticket to one of the above busses costs 3.20 Euro. The busses depart from the arrivals level, right outside the intra Schengen area, between doors 4-5. To get from the Athens International Airport to the center of Athens, you take express bus X95 which will take you in about 45 minutes to its end stop on the south side of Syntagma Square .

Airport to other destinations by bus

From 14 february unill the end of october 2009 part of the metro connection (blue line) from the Athens Eleftherios Venizelos International Airport will not be operational due to the construction of new stations, specifically the part between the airport and the Ethniki Amyna metro station.

Alternative ways of transport from the airport to Syntagma Square:

Athens Metro: From Airport to Syntagma and reverse (Part 1 ...

For your transfer from Athens Airport to Piraeus Port you have 3 options: Taxi, Bus and Athens Metro. Keep reading below…

By mapakettle Helpfulness Catching a bus from the airport into the city of Athens is so easy to do. However, just before…