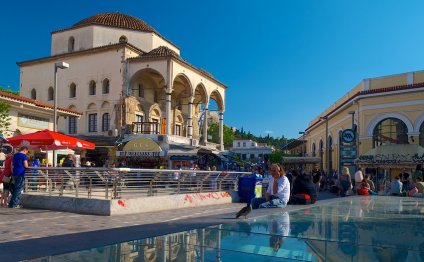 Tourism accounted for almost a quarter billion dollars of spending in Athens in 2012, according to figures released by the Athens Convention and Visitors Bureau at its annual meeting.

It also contributed 2, 450 jobs, or $48.3 million worth of payroll. More than $16 million in local taxes came from it, saving households in Athens $389 in taxes they’d otherwise owe in order to maintain current services. Those numbers, all of which were increases over 2011, and more were shared Thursday by CVB Director Chuck Jones when making a single argument: “Tourism is economic development.”

“Tourism remains an integral part of our local economy, ” he said.

Further, he argued for conventions and their worth to the local economy — not a surprise at an event hosted by a group with “convention” in its name and where an award is reserved for locals who spearhead bringing a new convention to town. A convention-goer will spend $210, or almost four times as much per day as someone taking a day trip to Athens and almost twice what someone staying the night will spend.

Athens-Clarke County Commissioner Jared Bailey, who is president of the board of directors of the Downtown Athens Business Association, said in an interview Athenians are fortunate to attract so many tourists.

“We, the community, have created a very attractive place to visit, ” he said. “... It’s a self-perpetuating attractor. You get the people here, they see the town, they want to come back, they want to bring their friends, their family, because we have a great town.”

Bailey, who has dedicated most of his professional life to promoting tourism and events, said it’s a big part of the success seen in downtown. It’s something that leaders should continue to focus attentions on because of the worth it shows.

“We need to support our tourism industry the best we can and with the resources we have, ” he said. “It needs to be distributed well, too. It doesn’t need to just go to one area or one entity in downtown.”

He and other commissioners discussed during the budget season spreading out the hotel/motel tax among more entities. Currently, it primarily goes to the Classic Center. But it’s more than that, he said, noting the upcoming streetscape project in downtown. That special purpose local option sales tax-funded project will be an indirect benefit to downtown by making it a more welcoming place to visitors.

Bailey said he’s “absolutely” optimistic about the future of tourism in Athens, especially with upcoming and developing attractions.

“There’s all sorts of new businesses coming in; there’s going to be another hotel, we’re experiencing a renaissance in the restaurants, fresh farm-to-table foods in Athens right now, ” he said. “That helps. We need to support that. There’s a lot going on. There’s events being created that will attract people.”