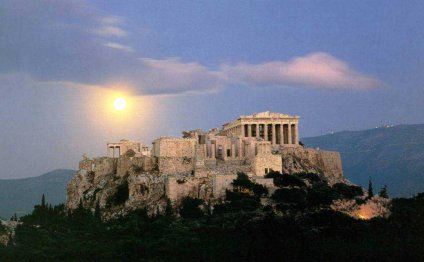 The Parthenon (Parthenonas), one of the world's most famous buildings, represents a high point in ancient Greek architecture. Built around 440 BC, the Parthenon's classical architecture has influenced buildings ever since - and still does today.

Built for worship of the goddess Athena, it was to give thanks for the salvation of Athens and Greece in the Persian Wars. Officially it is called the Temple of Athena the Virgin; the name Parthenon comes from the Greek word for virgin.

In the 2, 500 years of its existence, the building has been a temple, a treasury, a fortress, and a mosque; in the 6th century AD the Parthenon became a Christian church, with the addition of an apse at the east end. Today it is one of the world's leading tourist attractions.

Built of Pentelic white marble, the Parthenon is famous for its classical Doric columns and decorating sculptural friezes which depict scenes of battle and history in marble. Some of these, known as the Elgin Marbles, are in the British Museum and there is fierce debate about whether they should be returned to Greece.

Cycling in the Empty Streets of Athens, Greece