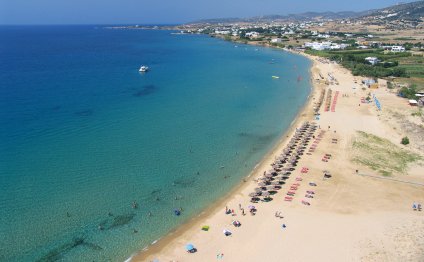 While on holiday in Kalkan, we heard about a tiny Greek island called Kastellorizo (Meis in Turkish) a mile or two off the Turkish coast in the eastern Mediterranean. So we went to Kas to catch the ferry to the island and were met by the most stunning, colourful harbour, which was like a picture postcard. The island is about five square miles and most of the action is around the harbour with its bars and tavernas. Strolling around the unspoilt village was wonderful. Historically the island has been in the hands of the Turks, French, Italians, British and Greeks, and there is a small museum to visit.

We hired a water taxi, which took us to an isolated beach where we were deposited with the promise of a pickup in time for the ferry back. Four of us had a couple of hours there swimming totally alone. It was absolutely magical, and sure enough the water taxi returned to deliver us back to the harbour as promised. What an unforgettable experience.

A day trip on Crete to little-known sites with no entrance fees and few tourists. From Rethymnon take the road to Armeni to explore the Minoan cemetery, more than 200 chambered passage graves in a grove of olive and oak trees. Nearby is a tiny bakery, where we drank peach tea and ate cheese and spinach pies, tiny apple pies and mushed grape desserts in the sunshine. Next we drove to the Commonwealth War Graves Commission cemetery by the sea at Souda Bay then headed farther west for the German war cemetery on a hillside known as Hill 107 at Maleme, the site of early fighting in the battle for Crete where the German invasion began in May 1941. Next to the entrance is a small café with a huge collection of Second World War memorabilia inside and out.

Asklepion is one of the many sights of historical interest on Kos. Photo: AP

Travel “light”, to enjoy the freedom offered by the Greek islands. Arriving at Athens airport take the 96 bus to Pireaus and an overnight ferry to, say, Amorgos in the Cycladic group, sailing your way back through the beautiful islands. Arriving at any island, before docking, scan the horizon for seaview rooms, ignore the touts and head straight to the rooms you located and negotiate with the owners direct. Rooms are often basic but clean and with friendly owners. Amorgos has a sense of solitude and an “away-from-it-all feel”. It is a rocky island with dramatic walks along its spine from Katapola to Eyiali passing the impressive Hozoviotissa Monastery carved into the mountainside.
Returning, visit Koufonisia on the way to Paros and eat at the Mouragio fish restaurant in Parikia, where the octopus hang out to dry.
Sifnos next – great walking, hilly landscape, sprinkled with white Cycladic villages. Visit Apollonia for its “windmill topped” views. The south coast has several white sand beaches. Buy “Topo” maps, available on most islands, and I suggest you spend two to three days on each, using the relaxing ferries and not the claustrophobic hydrofoils to get around.

Greek islanders to be nominated for Nobel peace prize