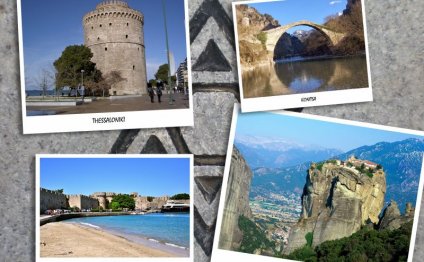 Are you new to the greek mainland, especially the less travelled northern and central areas, and wondering how best to get around? Here is some general information – have a read and then please do come and ask for specific advice which is available from all levels of expertise and in spades! BUT please do a bit of homework first so you can be helped to make the right decisions for YOUR trip.

First - get a good overall guide book and, as with choosing an island, select the places that for you are absolute MUST SEEs (for example Meteora, Vikos Gorge, Zagori Villages, Prespa Lakes & Edessa). Of course these are countryside locations and rural idylls, not ancient and historic ruins to which you can get all manner of arranged tours.

Second - get a road map of Greece. Michelin National 737 is ideal for initial planning. Now look at the places you must see and look at the distances between them and the roads and rail lines. Do they link up? Remember that, apart from the part-completed east-west Egnatia Highway, Greece does not have a wide network of motorways/highways/freeways.

Be aware that Greece does not have an infrastucture of public transport or bus services aimed at travellers (eg like the OzExperience and Wayward Bus in Australia). There are few frequent express bus services and trains do not serve western mainland of central and northern Greece. You will only get to many places (typically the ones you selected as must-sees!) by car. Or if money is no object possibly private taxi. Areas like Zagori are "2 buses per week on alternate Tuesdays, leaving at 7am, returning at 4pm" sort of connections, apart from the main villages which may have a couple of buses pass nearby each day. Timings are usually suited to the local populations’ needs for school and shopping.

If you decide to drive, taking advantage of the flexibility this offers, it takes time to negotiate twisty roads and mountainous terrain - and you are on holiday, not a rally! Be realistic about distances on unfamiliar routes. On the whole roads are quiet, well-surfaced and most signs are dual language. Bigger scale Road Edition* maps (scale 1:250.00) are ideal touring maps once you have chosen your routes. Zagori area is well mapped as it is a popular walking area and the Anavasi Topo50 3.1 Epirus Zagori is a good scale (1:50.000) for exploring around the villages either on foot or by car.

(*NB Road Edition maps are no longer produced as the company was taken over in 2010 by Orama, who will now publish the maps. However you may find old stock of Road Edition maps in shops in Greece - check for more up to date versions on the Orama website )

Start planning in good time - it will take time to order and obtain a good "paper" road map. You can check out routes using a driving website like which shows you visually the fastest route, AND the recommended route (often not the same), with number of Km, and estimated driving time.

Both sites let you print out the instructions

If you are taking or renting a GPS it is still a good plan to have a paper map to check where the SatNav is taking you. There are many roads which may be well used by locals, but are not sealed surfaces & you can easily end up on a dirt road to nowhere if you don't keep an eye on where you are going. If you have a problem on an unsurfaced road (burst tyre, bottoming the car etc) you will not be covered by insurance & rescue could be very expensive.