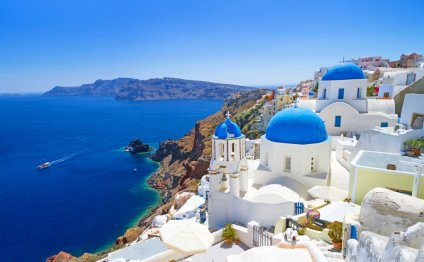 Greece has one of the longest coastlines in the world – almost 16.000km. The mainland and island areas end in a myriad variety of coastlines, with countless beautiful small beaches, charming bays and coves. Half of the aforementioned length includes the thousands of Greek islands scattered through the Greek seas, while the rest extends along the mainland.

The Greek shores are world-famous and exceedingly popular because they are known for their crystal clean and clear waters, as well as for their unique diversity. Visitors have the opportunity to enjoy beaches stretching along over many kilometers, sheltered bays and coves, golden stretches of sand with dunes, pebble beaches, coastal caves with steep rocks and dark sand typical of volcanic soil.

Greek summer is one big festival

Cosmopolitan destinations with a high level of infrastructure and services, family units at reasonable prices but with high standards, and lonely beaches, totally unspoiled, satisfy every need. Peaceful coves, where one can swim and fish, endless beaches with waves big enough for windsurfing, beaches with a variety of services to offer, promising absolute pleasure (where, apart from swimming, you can enjoy water sports - water skiing, windsurfing, diving, as well as other means of having fun in the water, such as the parasailing, “inner tubes”, “bananas”, wakeboard, jet ski) urban beaches a stone’s throw from cities, all allow the visitor to enjoy the rejuvenating power of the Greek seas.

Every year hundreds of beaches and marinas in Greece are awarded with the Blue Flag. The Blue Flag award to a beach is an international institution that began in 1987. The criteria a beach must meet in order to receive a Blue Flag are very strict, both from an environmental viewpoint as well as from the aspect of services provided to bathers and safety. In Greece about 400 beaches and 9 marinas have been awarded the Blue Flag; this number rises each year, a true indication of the Greeks’ love and regard for the sea.

Many Greek beaches have become synonymous with luxury and a carefree life. Navagio (Shipwreck) on Zakynthos, Balos on Crete, Lindos on Rhodes, Manganari on Ios, Foinikounta on the Mani coast and numerous others are inundated each year by lovers of the Greek seas.

Elia on the island of Myconos is of course the most famous Greek beach. Popular Elia is just 8 kilometres from Chora Myconos and combines the wonderful Cycladic landscape, bright blue sea and superior infrastructure.
Kolympithres on Paros with its strange rock formations carved out by the sea, captivates travellers. The beach lies in north-west Paros, in the gulf of Naoussa. It is essentially not a single beach but many different ones: an incredible, natural work of art.

Greece: Where did all the money go?