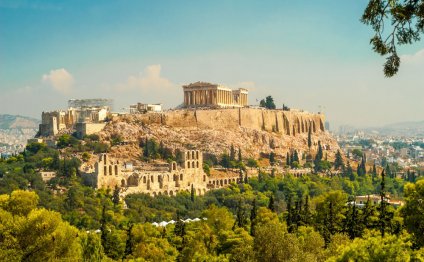 Athens is a blend of ancient and modern architecture dominated by the Acropolis hill. (Photo: Images )

Athens was named after Athena, the goddess of wisdom, who is regarded as the protector of the city. This lively, cosmopolitan capital offers a blend of ancient Greek and Roman culture and modern shops, hotels, restaurants and nightclubs. You can visit at any time of year, thanks to the temperate climate, and make sure that you do not miss any of the city's attractions by booking an organized sightseeing tour.

This is Athens' main - and oldest - square, which is busy 24 hours a day. Although it is not particularly beautiful architecturally, Omonia Square is full of character, with international restaurants, boutiques, department stores, hotels and little kiosks selling newspapers and magazines from around the world. The square should be on any sightseeing list, but visit during the day, as the area is rather seedy at night.

This sacred rock rises in the very heart of Athens and dominates the city skyline. The main entrance is from Dionysiou Areopatigou. Several ancient monuments, erected during the city's golden age, crown the summit of the Acropolis, including the Temple of Athens Nike and the Erechtheion Temple, but the most famous edifice is the Parthenon, a temple dedicated to the goddess Athena. This is constructed from marble taken from Mount Penteli, and its Dorian design, created by architects Kalikrates and Iktinos, has inspired thousands of later buildings. The exterior pillars are so huge that they had to be carved with a slight curve to trick the human eye into perceiving them as straight.

Plaka is a historic area of downtown Athens, nestling at the foot of the Acropolis. It is characterized by narrow winding alleyways, with steep stone staircases, neoclassical mansions and a profusion of colorful flower displays. Plaka contains dozens of traditional tavernas and street cafes, boutiques and art shops, as well as museums and monuments, such as the Lysicrates Monument. The Anafiotika quarter is one of the most peaceful and picturesque parts of the city.

Some of Athens' most famous landmarks include Hadrian's Arch and the Olympeion, the largest temple in Greece, which sits on the western bank of the Ilissos River. The Theater of Dionysus was originally constructed of wood during the sixth century B.C. and hosted plays by Sophocles, Euripides and Aristophanes. It was rebuilt in stone around 325 B.C. and extended to seat more than 15, 000 spectators. Approximately 20 of the original 64 tiers survive, as does an altar to Dionysus and a set of marble thrones.

The National Gallery (nationalgallery.gr) was founded in 1900 and contains more than 16, 000 artworks, including paintings, statues and engravings by both ancient and modern artists. These are housed in two separate buildings, which also contain a photographic archive, restoration rooms and studios.

This athletics complex at Marussi was the main venue for the 2004 Summer Olympic Games. The futuristic park was designed by Spanish architect Santiago Caltrava and includes numerous stadiums, a velodrome and athletes' accommodations, linked by white marble walkways that radiate outward like the rays of the sun. The most remarkable features are the glass and steel roof of the main arena, and the Wall of Nations.

greek and spanish girls dancing in taverna in Athens ...