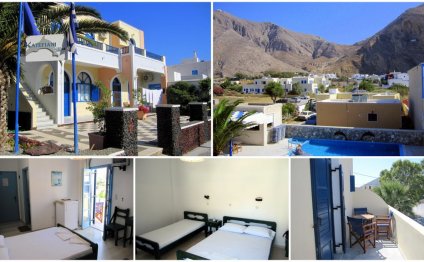 So you're ready to get off the rental unit superhighway and take the first exit ramp onto ownership boulevard—but you're well aware that rental prices around NYC are more obscene than a man furiously licking his shoe on the subway. Sure, you could put some of that money toward a Scottish castle, God knows they're affordable these days. Or you could buy a small plot of land in upstate NY. But why not dream really big? Like, isolated-paradise-island-in-the-middle-of-the-Mediterranean big?

City Realty released their 2014 year-end report for Manhattan yesterday, which included a chilling list of the top 25 most expensive sales in 2014, which all came in over $30 million. Even the average price of a Manhattan apartment reached a record $1.8 million last year, and Brooklyn isn't far behind.

So why waste your money on a pied-à-terre when you can indulge in Greece's gorgeous private-island property market? Sure, there are some pretty sweet tax abatement reasons to stick with NYC, but wouldn't you rather spend part of your summers plucking olives and peaches from your own trees, stuffing your face with feta, or listening to the echo of rebetika music bouncing off the mountains while drenching yourself in olive oil baths?

WSJ reported this week that at least 20 privately owned Greek islands are currently up for sale, some for the first time ever. They're practically giving them away: "I have customers telling me they need to sell as quickly as possible. They say they can’t handle the tax burden, " Yannis Kriaras, a real-estate agent based on the island of Crete, told WSJ. "Most of them resent having even inherited an island."

Many of the islands are underdeveloped—they're fixer-upper islands!—mostly beach and rock and some wooded areas (this sounds really terrible, we know). And sure, there's some red tape to get through ("up to 32 bureaucratic steps are required, including background checks to determine whether a prospective buyer would pose a threat to the country’s national security") to acquire one.

But let's not lose track of the big picture: you can own your own ISLAND. For the price of an average or slightly above-average Manhattan apartment! Sure, you'll have to put up with the occasional yacht mooring (all beaches in Greece are public, how about that), but there are always ways of dealing with irritants.

So scroll through above and check out the eight islands we picked for you (sorry folks, Nafsika Island has already been sold in the last couple days). Just please keep in mind that by reading this post, you are agreeing to let us use the island whenever we want. If you are reading this sentence, then it is a legally-binding statement. This is how the law works.

LOUIS CRUISES - Cruises to the Greek Islands with Louis ...

Skyscanner has already seen an increase in interest for flights to Greece. As hotels, restaurants and tourist businesses…

As a cruise region, the Eastern Mediterranean encompasses a broad range of territories that include the Adriatic coast of…